The Nevada mining industry supported an average 14,787 direct employees in 2018, with about 75,000 additional jobs related to providing goods and services needed by the mining industry. The average pay for mining industry employees during this time was $97,600 per year, the third highest average private employment sector in the state.[2]

Major mining companies such as Newmont Goldcorp and Barrick Gold Corporation operate many of the state's gold mines. Active mines include those at Jerritt Canyon and the Carlin Trend.

Problem: Gold discovered and validated in western Nevada.  Property to be leased to Marietta Hill Gold Corp.  Mine to be permitted and developed to extract and process 20,000 to 30,000 ounces of gold during the next 3-5 years.  Initial $100,000 to complete due diligence, execute land lease agreement, and finance costs to raise capital for the mining operations.

Solution:  Cedar Strat has hired a team of consultants in geology, business finance, mining, drilling, equipment, permitting and gold market.  Tests and assays have verified the discovery.  Steps have been taken to engage the lease acquisition, begin permitting, a financial package is being developed to raise $5 Million in a combination of equity and debt financing.

Opportunity:  Investors that capitalize the first $100,000 shall have the option of either owning an equity position in the to-be-created entity or may receive gold, post first round extraction, at a price of $500 per ounce.  At current prices (Which are increasing weekly), 25,000 ounces will be valued at $45 Million.  Including all recurring and non-recurring costs, the project can profit 35-40%.

Timing:  An initial $2.5 Million of the  capitalization will initiate the mining and water permitting that will take 18 to 24 months and complete the lease acquisition and core drilling. Once the permitting is complete then the entire team, equipment, and mining operation can be put in place with the remaining $2.5 capitalization. One to two thousand ounces may be extracted by gravity separation as early as Q4 2022 to repay initial investors. The remaining gold will be extracted from the crushed ore by cyanide heap leaching which could take several years

Lack of publicly available geological survey:  Nevada is probably the only state in the Union that has never authorized a geological survey of its mineral resources and student summer field camp mapping comprises most of the geological mapping of western Utah.  That is the reason why major oil companies in 1984 gave the financial incentive to Dr. Chamberlain to resign from working for Bunker Hunt at Placid Oil and continue the Great Basin geological survey Shell Oil Company started by investing $220 Million 1950’s through the 1960’s to create the first stratigraphic framework of the Great Basin of western Utah and Nevada.  As a result, Cedar Strat controls the only Great Basin geological survey that reveals the natural resource treasures of the region including oil, gas, and minerals.

Exclusive 30-day Option:  Cedar Strat will give the investor who buys the 50% interest in Marietta Hill LLC a 30-day excusive option to also purchase interest in its prized Diamond LLC with a potential of producing 40 billion barrels of oil, 15 million ounces of gold, 150 million pounds of vanadium, and thousands of ounces of platinum and rare earth elements for a total investment of $685M, which should return at least $5 Trillion Dollars to investors.  This is estimated from analysis of 5000 mineral samples and core reports from top Testing Labs, the only digital stratigraphic Great Basin stratigraphic database with surface gamma ray logs, geological mapping with precisely located attitudes, proprietary gravity surveys and other data that comprise the Great Basin geological survey.

Due Diligence Completed:  Cedar Strat has hired a team of consultants in geology, business finance, mining, drilling, equipment, permitting and knowledge of the gold market.  Tests and assays have verified the discovery.  Steps have been undertaken to effectuate the lease acquisition and the permitting process.  To date the company has investigated the land use, permitting requirements, and bond requirements with the associated preliminary, budget as well as validation of the discovery including, but not limited to:

Gold Option: Once the mine begins to produce gold the investor can either choose to take his share of the gold and relinquish his share in the company or retain his share in the company and take 50% of the gold produced when the mining is complete.  The Investor understands that by electing to take the gold in lieu of retaining interest in the LLC it gains the potential of receiving the 15,750 ounces of gold even if less than 35,000 ounces are produced.  However, if it elects to retain 50% interest in the LLC and if more than 35,000 ounces of gold are ultimately produced it gains the potential of receiving more than 15,750 ounces of gold.

Timing:  SKR Engineering suggests that it will take about 18 to 30 months to acquire mining and water.  Sunroc Construction believes that they can strip off the overburden, mine and crush the ore and stack it onto heap leach pads within six months after the mining permits are secured 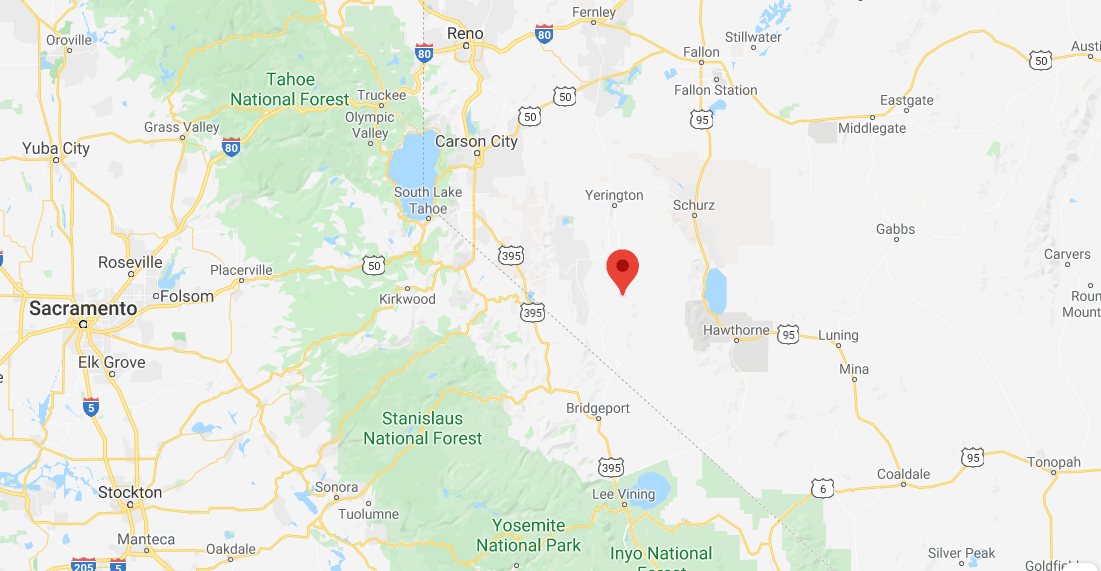 These tables  illustrate the amount of recoverable free gold above the +35 mesh screen size. On the right of the table the +35 mesh has gold 41.3% recoverable by crushing the ore to ¼ inch. The remaining 58.7% of the gold is in the –35 mesh of the crushed. The importance of this study is the cost of crushing to liberate the gold in the –35 mesh material. The remaining 58.7% of the gold would have to be leached. A factor in this decision is that leaching works best on smaller particles of gold at a faster recovery rate.

Because the ore has to be leached anyway, unless Kent Hartley, our mining engineer tells us otherwise, it is probably cost effective to leach all the ore and skip the expensive process of crushing the ore fine enough to separate less that 50% of the gold by gravity separation. 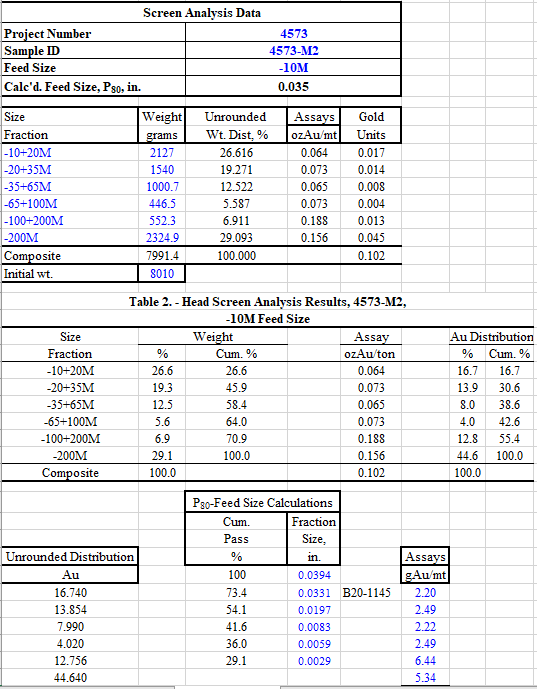 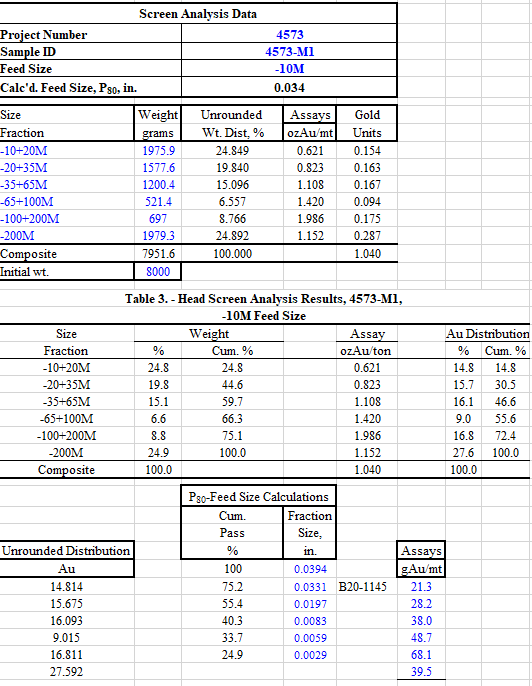 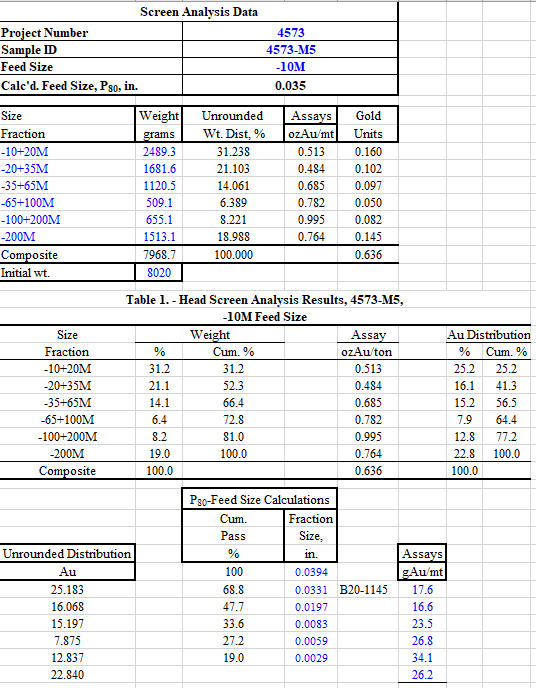 McClelland Laboratories was able to photograph the gold that it recovered from the samples: 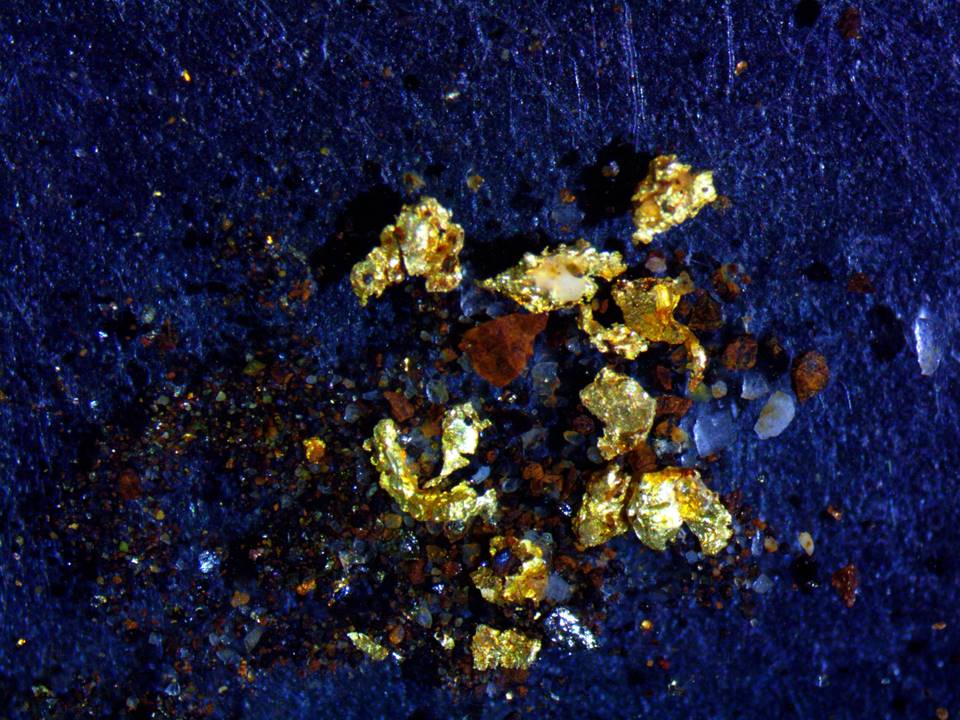 This Geological map of the area of the Marietta Gold claim (yellow and red) is used to determine the volume of gold ore. This map of the Marietta Gold LLC property shows the thickness of measured feet where the ore face is still exposed in five of twelve exploration pits.  The thickness of the ore could not be measured ore face in the remaining seven pits (G) because the ore face is covered by debris.  However, Gold assays from samples collected from all twelve pits are at the economic cutoff grade of 0.003 ounces of Gold per ton or higher. 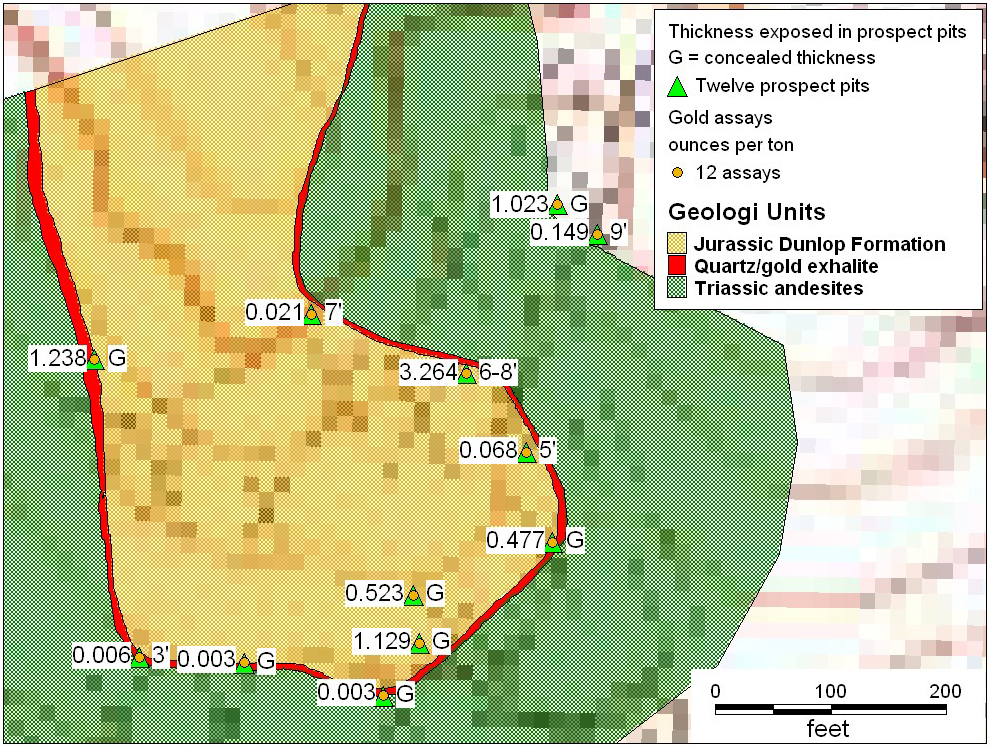 The twelve Gold assays were made by one of the two reputable chemical laboratories in the Reno, Nevada area (American Assay Laboratory or ALS Geochemistry) in 2007. Though we have the results of the assays the Assay certificates have been misplaced. The average assay of all twelve samples is 0.659 ounces of Gold per ton. However, the average assay of nine of the highest samples is 0.877 ounces of Gold per ton. 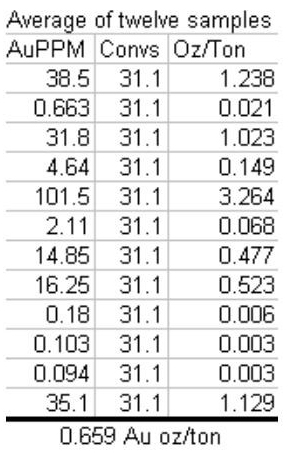 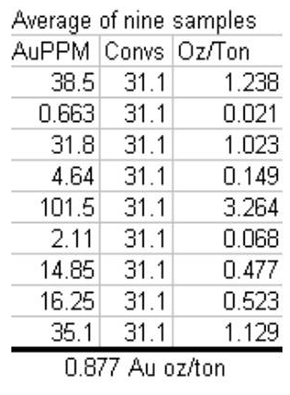 The following geological maps and cross sections are used to determine the volume of overburden.

Figure 1 Geological map of Marietta Hill showing the relation of gold-bearing quartz exhalite (red) in relationship to the overlying Jurassic Dunlop Formation (orange), and underlying Triassic andesites and the twelve gold assays (yellow dots with numbers) in parts per million (PPM), and proposed exploratory wells (red dots).  The western end of the red rectangle is the western end of the Marietta mining claim. 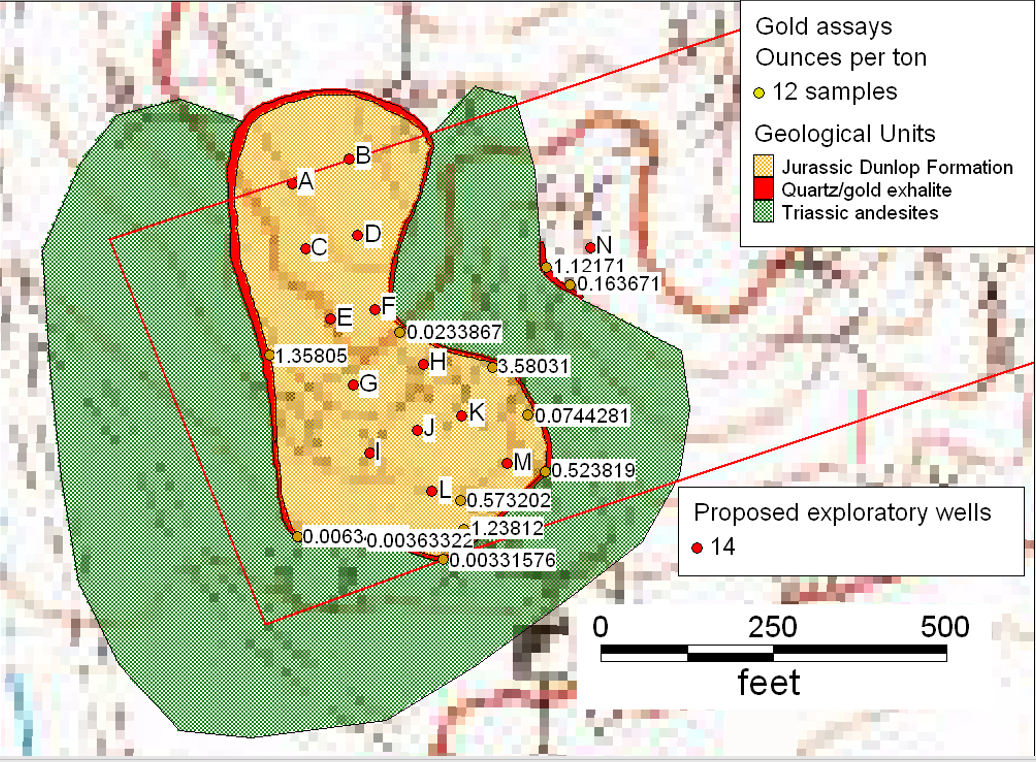 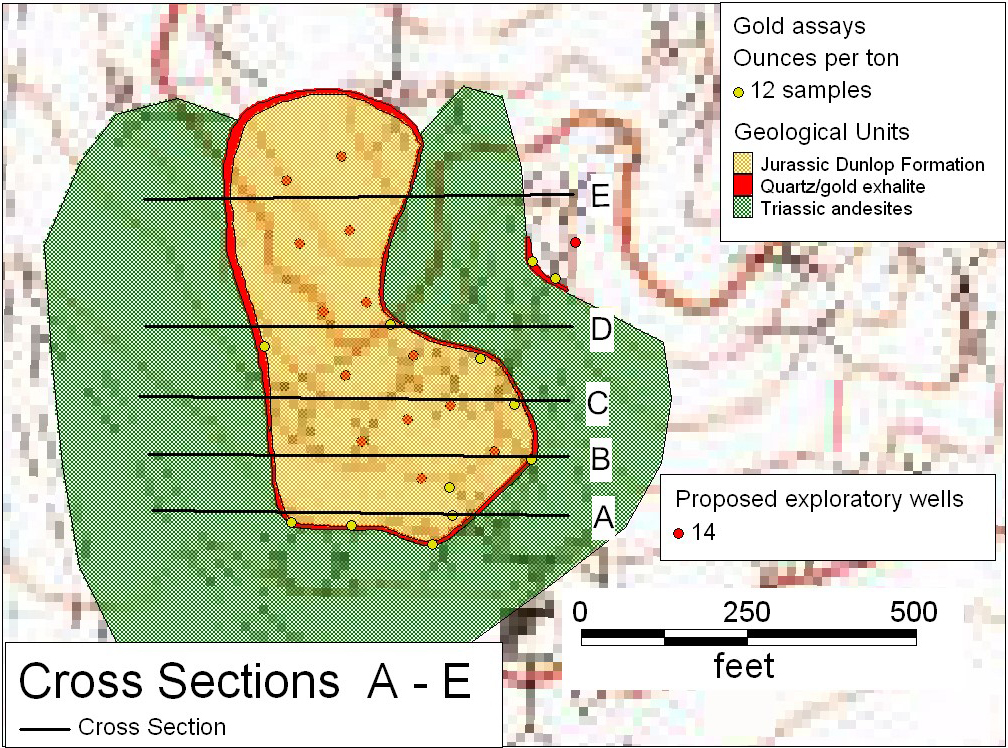 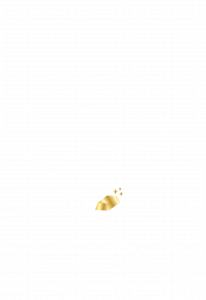